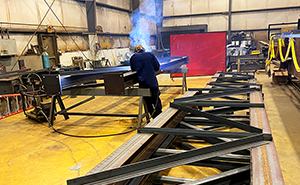 “ASAP… one week.” Those were the words Capco Crane & Hoist Inc. heard when they received a call from longtime customer Nypro Medical.

A manufacturer of medical equipment, Nypro Medical asked Capco to “produce a freestanding crane system in record time” for their plant in the Boston MetroWest area location. “They want to set up a room, ASAP, to produce ventilators for hospitals,” says Capco management.

With the outbreak of COVID-19 spreading across the world and threatening to shake our economy and the health of our citizens, material handling companies like Capco Crane & Hoist Inc., which specializes in overhead material handling systems, are being called on in a time of great need. The United States alone has reported thousands hospitalized with COVID-19 and our healthcare systems are experiencing a shortage of supplies.

Given these unprecedented times, Capco Crane & Hoist understood that they must act fast.

“Speed is the key, they want a crane system that would normally be [finished in] about 12-14 weeks, but they want it designed, fabricated and installed in ONE week,” says Capco management.

“We feel it is essential to [be] helping them build the ventilators we all need, we are proud to do our part and we are capable of doing this!” adds Capco management.