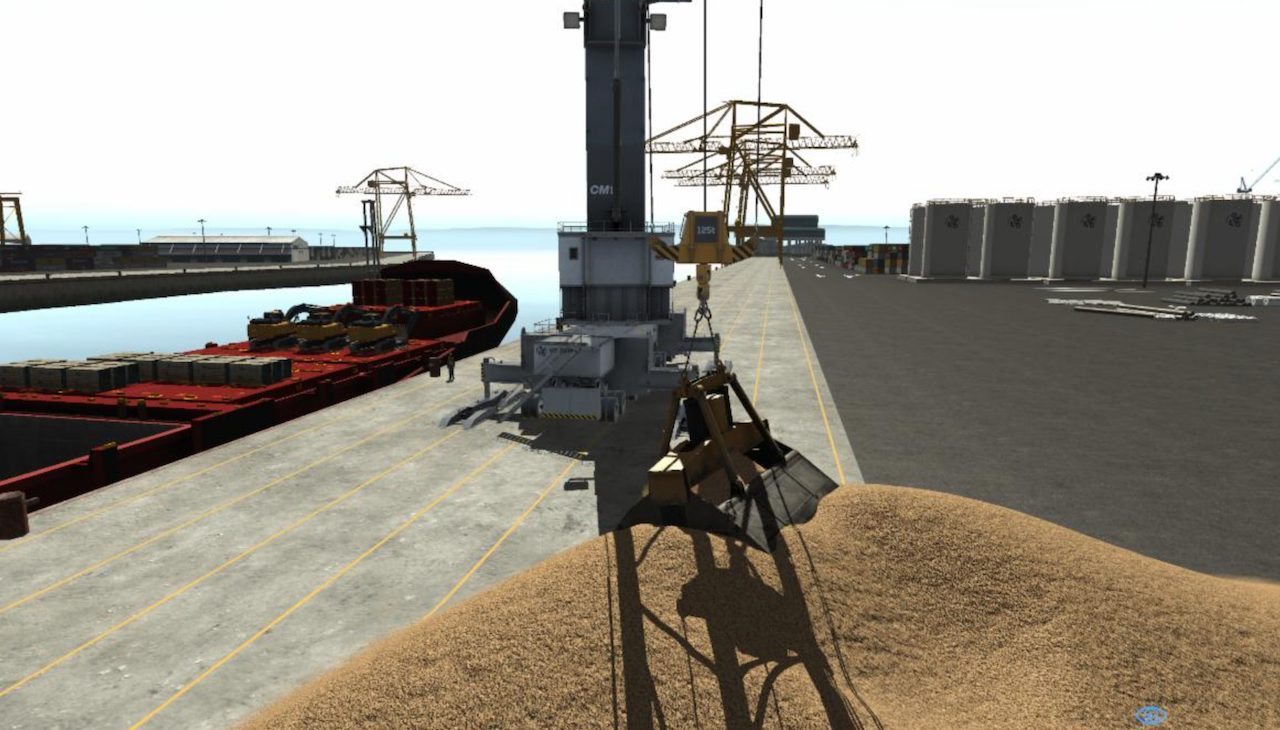 PCCA sent operators to nearby Del Mar College, which has used Vortex Simulators as part of its Corporate Services department for several years. The full case study is provided below.

With a new Liebherr LPS 550 cargo handling crane on order, Texas (US)-based Port of Corpus Christi Authority (PCCA) was under the gun to train its staff to operate the new equipment. Because on-the-job training would create safety risks within the busy port, and because no similar cranes were available in the vicinity, simulation seemed to provide the best option. A simulation-based training solution had to be found quickly.

PCCA quickly discovered that, as a CM Labs client, neighboring Del Mar College was positioned to provide the answer. Following the installation of CM Labs’ Liebherr LPS 550 crane program on the school’s simulator, PCCA was able to begin training its extensive staff of operators.

Serving the needs of heavy equipment operators on nearly every continent, CM Labs is the world’s leading provider of training simulators for the port and construction sectors. Organizations like PCCA are secure in knowing that they are part of a growing global community of CM Labs simulation users.

Supported by CM Labs’ Liebherr LPS 550 training simulator, PCCA is preparing a full complement of operators in the efficient and safe use of the new portal crane. With reduced learning cycles, the seaport is fully leveraging the crane’s capabilities to increase productivity while ensuring worker safety.

The Port of Corpus Christi Authority (PCCA) is the largest seaport in the United States based on total revenue tonnage, and the country’s largest in terms of crude exports. Its vision is to be the energy port of the Americas, and with that in mind, many of the non-petroleum commodities handled on the dry bulk side are related to the oil and gas sector.

Despite the flow of goods and materials passing through the port, priorities are clear for Bulk Terminal Manager, Eric Battersby. “Safety is our number-one priority here at PCCA. Not only that of our employees but also the wellbeing of third-party employees working around us, as well as the infrastructure associated with the moves that we make.”

Recently, PCCA launched a renewal initiative to replace some equipment that had been around since the 1950s. Upgrades included replacing one of their older gantry style cargo handling cranes with a multi-purpose Liebherr LPS 550 crane. New equipment meant retraining operators as very few had experience running that type of crane.

“Machines such as the Liebherr LPS 550 are not something you see every day, so it’s not like we could just go down the street and jump on somebody’s crane for training.” In the past, many terminals turned to on-the-job training to upskill new operators; but putting somebody up in a piece of machinery on which they are unfamiliar is risky.

“Field training definitely has its risks both from a safety and productivity perspective,” observed Battersby. “Productivity is a big driver behind bulk operations and when you put somebody who’s unfamiliar with the machinery up there it’s not long before you start getting questions as to why productivity is falling or why it’s taking longer than it had before. Plus, you’ve got 50 tons hanging from the end of the crane hook. That’s a lot of weight and you can do serious damage if you put somebody in there who isn’t familiar with the controls and movements of that crane.”

Because experience and hands-on instruction were nonnegotiable, a training simulator was the natural choice.

The first time Battersby had experienced a crane operator training simulator was at the Breakbulk conference in Houston. CM Labs was exhibiting a simulator at the conference and the company’s representative encouraged Battersby to run through a few scenarios. One of those exercises was running the ship to shore crane, loading, and unloading containers. That simple encounter made a lasting impression.

“I couldn’t believe how realistic it was,” he explained. “It was incredible. I’ve run many different types of cranes in my life; but operating a ship to shore crane with containers was one thing that I had never done. It was neat to be able to get on there without any reservations and go through that movement. At that point I was sold on how useful the tool would be.”

Battersby was surprised at the accuracy and realism of the CM Labs simulators, especially a Liebherr training simulator that CM Labs had also developed, and which was also on display at Breakbulk.

“So many things are built into the simulation that are realistic, just little nuances like the slight delay that you have when you press a joystick to get a movement started or when you release the joystick to get it stopped. All those things are really spot-on.” While the advantages and opportunity for simulation-based training were obvious, Battersby just wasn’t sure how he was going to incorporate it at the PCCA.

Buying into the CM Labs ecosystem means there is no shortage of users willing to share their experiences and tips on using the simulators. And it didn’t take long for PCCA to find a reference. In fact, the answer was practically next door.

Reaching out, Battersby discovered that nearby Del Mar College was in possession of a trailer-based CM Labs Vortex simulator. Although they did not have the mobile harbor crane hardware or software, that problem was soon rectified.

“The Del Mar folks got in touch with CM Labs to get the ball rolling,” said Battersby. We knew that the full suite of port training packs could run on any simulator hardware, so we worked with CM Labs to make it happen.”

It was then that crane operators could begin training. Housed in a 40-foot climate-controlled trailer, the simulator was taken to the bulk terminal facility where it would provide daily training for a couple of months. Initially operators were sent in pairs for a couple of hours of training on the simulator, with one person operating while the other observed.

Training began with becoming familiar with the controls along with the cause and effect of different commands. As learning progressed and delivery of the new crane drew near, training shifted its focus to productivity, turnover time, grab efficiency, and of course, safety.

“If we saw that someone wasn’t able to control the crane’s load, we recognized that was going to be a big problem,” said Battersby. “The instructors were really good about laying out scenarios for the operators and challenging them to do things they weren’t necessarily familiar with.”

Battersby was surprised by the wide variety of available metrics that the simulator was able to capture. Most impressive was that cycle times were clearly displayed, allowing the trainee and instructor to quantify productivity performance in a real-world scenario. He also noted the simulator’s safety metrics.

“As a crane operator, you’re responsible for the safety of the entire shipyard. And the CM Labs simulator helps train against unsafe maneuvers. For example, if you’ve got too big of a swing going on the bucket or if the load is out of control, the operator and instructor will be alerted as an area for improvement.”

Unique to PCCA is the fact that they are one of the few ports where machinery is operated exclusively by the facility’s personnel. In such a busy seaport it’s comforting to know that all crane operators have received the highest level of training.

“We don’t want to rely on outside labor to run our crane,” said Battersby. “At any time, you might not know who you’re getting on a particular day and, quite frankly, you may have no idea how proficient they were on the equipment. When you have a multi-million-dollar piece of machinery it’s nice to know that that you have the same people running that equipment every day.”

With the highest priorities of safety and productivity, busy ports are no place for on-the-job equipment training. And as a former crane operator himself, Eric Battersby knows the value of simulators.

“I find myself sneaking on to the simulator from time to time,” he explained. “I want to stay familiar with the new equipment and pass along some of what I’ve learned over the years to help our crane operators stay safe, efficient, and productive.”

There’s security in numbers. And organizations like PCCA can take comfort in knowing that they are members of a growing global community of users backed by CM Labs – the world’s leading provider of simulation-based training solutions for port and construction sectors.

World of Asphalt Added to ‘Fastest 50’

3D Lift Plan of the Year