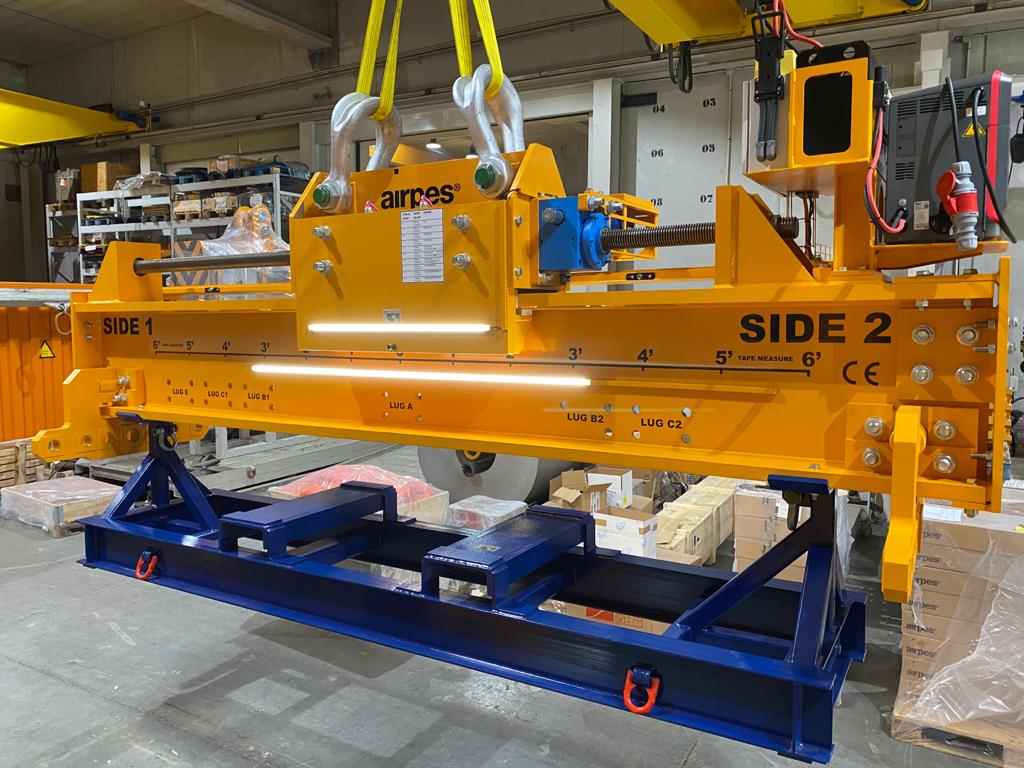 Airpes, a manufacturer of lifting, weighing and below-the-hook equipment, has shipped the first in a series of 75 metric ton (tonne) capacity custom, adjustable spreader beams to one of the largest companies that assembles wind turbines.

The beams are a new development of an old type that the customer bought from various suppliers. Airpes and the customer came together to address some safety and flexibility issues in order to arrive at the new design. Airpes has active sales with three of the top four wind turbine producers in the world.

The beam weighs approx. 5 metric tons (tonnes) and measure approx. 33 ft. (10m); it was designed with flexibility in mind and will be utilized beneath the hooks of various overhead cranes and mobile cranes, which range in capacity from 100 ton to 400 ton. The beam will primarily be used to lift almost-finished product in the final stages of a manufacturing and assembly process that spans the U.S., India, and Germany. It will also be capable of lifting repower turbines in the field.

The device has a three-way adjustable balance mechanism that allows flexibility for different operating environments and also to provide a safe back-up in case power is lost. The bale that rigs the beam to the hook can be shifted forward and aft, when unloaded, to adjust for new types of loads with different weight distributions. It was manufactured at Airpes’s main factory near Barcelona, Spain.

Tad Dunville, general manager at Airpes Americas, said: “The beam is designed for safety and flexibility. It can work under most reasonably similar cranes of that capacity and has features that allow it to quickly be moved from crane to crane and also refocus on somewhat different loads. They are one of our best customers for safe working procedures; the factory is very clean and efficient, and they have an impressive safety crew. I love working with them because they realize that not just the load is important, but so are the people and the time.”

Airpes delivered a complete turnkey solution that included rigging gear. Dunville continued: “Our customers expect us to deliver a whole package. That means the ancillary features are no longer ancillary. If they have to hunt around for five days to find a shackle that we regularly buy, it doesn’t add value. Same with logistics and product support; we are quickly signing up partners in a support network, because our customers want a solid base to operate from.”

The device has a three-way adjustable balance mechanism.

Airpes has three principle lines of business, namely pre-engineered weighing and monitoring kits for overhead cranes, including load cells, overload protection, readouts, and data loggers; engineered lifting devices for wind turbine erection; and engineered below-the-hook devices, such as coil grabs, rotating blocks, and magnets (and lifting and spreader beams). As is the case with the majority of case studies, the latest order included product design, build and documentation.

Dunville said: “There are very few manufacturers out there that have built any diesel-hydraulic spreaders; we rarely do not have one under production. Beyond that, we offered the best price, a very robust design, flexibility to work with automation, and a vibrant support network. We were also willing to train a few local providers as dealers and repair centers and that made a big difference. Nobody wants to know how smart we are, they want to know how quickly we can support them.”

He added: “There always is [an alternative, less technological solution], but we don’t want to be the bottom feeder—ever. We all know who those guys are, and they’re constantly creating problems for owners with inexpensive components that have no support network. That said, we always like to think through some value engineering solutions with our crane builder partners. In this instance we were once again able to save some serious money by re-thinking non-critical pieces.”